The Warning by James Patterson and Robison Wells is a face paced, science fiction, YA novel. The book gets right into the action starting with high school student Jordan, and his family going back home from a sick camp after their small Southern town was hit by massive amounts of radiation from a power plant explosion. The book follows Jordan and his best friend Maggie, as they navigate through the new bizarre things that are happening upon their return, and the beginning of their lifelong friendship turning into something more. 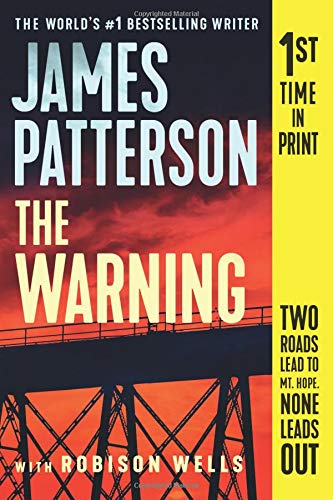 “I listened to the audio book version of The Warning and the narrators were fantastic! The narrators, along with the good writing of the authors, did a great job really making you feel like you were right there in the action and knew every character personally. The character development was well done and made me as the reader/listener, have an emotional connection to everything they were experiencing. The way the authors weaved humor into the storyline and into the personalities of Jordan and Maggie, was brilliant! Jordan and Maggie were very likeable characters, although there were a few more cliché moments between them than I would have liked. Although, romance can be a little cliché even in real life, so it worked.”

“I enjoyed the face pace of the story. The book was an enjoyable read and there were twists and turns that kept me wanting to read further to find out what would happen next. I would recommend this book for someone looking for an easy-to-read, fast paced, action packed, dystopian, science fiction novel.”

“Two roads lead to Mount Hope. None leads out.” The Warning by James Patterson and Robison Wells nails its hook well. A YA sci-fi thriller, it quickly becomes clear that the authors have gotten the most important thing right: their characters. The book’s alternating first person perspectives, Jordan and Maggie, are smart and self-aware sixteen-year-old friends drifting not-so casually into something more, and the authors never forget the romantic tension between them. Whether exploring the mysteries of the nuclear accident that forced their town’s evacuation for months or desperately trying to survive the horrible truths they uncover, the characters remain grounded as each parses what the other wants in regards to their relationship. In fact, the authors derive significant humor from the pair’s “will they, won’t they?” status, making certain that every time that question is about to be answered, something horrible happens to interrupt. Watching both characters notice this and become gun-shy about further attempts was a good laugh. As I said, self-aware. ”

“The plot is fast-paced, arguably too much so. Violent and bizarre events begin so early, and seemingly do so little to rattle the townsfolk, that it dragged me out of the story at first. I could have used more time to establish the mood of this setting, with subtler signs that not all was what it seemed before things started getting really weird. The same problem of “pacing at all costs” hurts the worldbuilding that underpins the book’s big revelations and leaves the ending feeling rushed. Defying convention, the book’s middle third is easily its strongest section, with a still intact mystery and the tension running high as a result. Regardless, the book is a short, easy read and a reliable page-turner, with characters that keep you smiling through its more hurried portions. It’s a solid choice for a late-summer beach read.”

“The Warning by James Patterson and Robison Wells is a fascinating story that takes the old maxim of “things are not what they seem” to the extreme. After returning from a disaster, expecting to find their hometown in ruins, Maggie and Jordan return to what, at first glance, is a paradise. Everything seems better than they left it, but Jordan’s father is mysteriously unable to return home from his job at the power plant. Maggie’s mother, the town veterinarian, receives an increasing number of calls about savage animals. To make matters worse, after a head injury, Jordan starts hallucinating, only he’s not sure what he’s seeing isn’t real. They being to wonder if all these things are related. Is someone behind all this? Was even the disaster that drove them from town orchestrated? ”

“The Warning is an intriguing tale following Jordan and Maggie into places they never imagined. The first half strings you along, wondering what is really going on, though I did feel like the end had too much crammed in too fast. Still, it was an enjoyable story.”

“I read The Warning by James Patterson and Robison Wells this last week. It was a riveting read from the start, I was hooked from the first page. The twist and mystery behind the plot kept me guessing at every corner. Both Jordan and Maggie were fun and ingenious characters. I enjoyed watching their relationship mature from being lifelong friends to something more. Their thought process intrigued me as they discovered the mystery behind the town of Mount Hope. Watching the teens become heroes was compelling. It kept me reading way past my bedtime. It was action packed and kept my attention all of the way through. This was a great book to read and one I will definitely be reading again.”