…but he never expected to end up in a Nazi POW camp.

Student-body president with all-state sports honors, Don was destined for a bright future. His plans included college and marrying the love of his life, Laura Jeanne. Then fate stepped in. Japan bombed Pearl Harbor and America entered World War II.

At age 19, Don joined the United States Army Air Force and flew in the 368th Fighter Group of the Ninth Air Force. That is, until he was shot down behind enemy lines in the Battle of the Bulge. Lost, cold, and hungry, Don spent Christmas Eve wondering if he’d ever see his family again.

From dirt-poor, small town roots, Don was the quintessential all-American boy, becoming student body president of his high school and earning all-state honors in football, basketball, and tennis. At age eighteen, he was attending college, had fallen in love, and appeared destined for a bright future. Then fate stepped in. Japan bombed Pearl Harbor and America entered World War II. Don joined the U.S. Military, along with millions of other young Americans, and went to war. Before shipping overseas, he married his high school sweetheart, Laura Jeanne.

Excerpts from Don and Laura Jeanne’s deeply personal letters allow readers to glimpse emotional events through the eyes of a young couple who lived through these remarkable times. Don and four other flyboys in the 368th Fighter Group of the Ninth Air Force became so close they called themselves The Five. The author artfully weaves their stories together from letters, journals, personal histories, mission reports, and interviews, creating a moving and unforgettable World War II story. 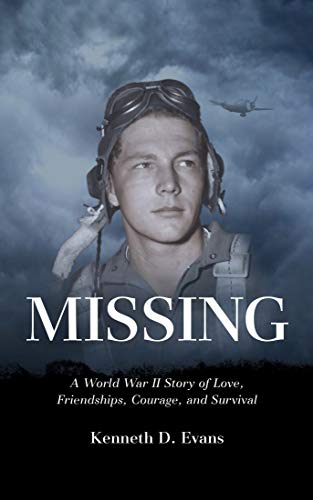 There is something utterly unique about a book like Missing: A World War II Story of Love, Friendships, Courage, and Survival. We are used to hearing facts and figures from World War II, but they make us numb to the true human impact of the war. In this heartfelt retelling of his father’s time behind enemy lines, Kenneth D. Evans paints a vivid picture of this dark time in history.

The narrative alone is captivating. Don finds love, friendship, and hardship, all before being shot out of the sky on Christmas Eve. There are moments of fear, action,and suspense, but they are coupled with reprieves of sweetness. One of the most emotional anecdotes comes from Don’s forced 200-mile march when captured by Nazis. While taking shelter in the midst of a city being bombed, he is comforted, not attacked, by a German woman sharing her Christmas candy.

It is the moments like this that give context to a point in history that we are used to seeing as “us verses them”. The author does a great job of balancing plot and facts to emphasize that yes, this really happened, and yes, it impacted everyone. He not only focused on his mother and father, but on the friends his father made along the way. You will find yourself attached to their own tales of bravery and comradery.

To aid in telling their stories, Kenneth D. Evans found pictures and excerpts from his parent’s personal writings. This might be one of the best parts of the book.It is in those excerpts that you pause and remember, this is not some fictional story. These are real people and their actual tribulations. Not only do these first-person accounts paint an even more complete picture, but the end of their stories become even more satisfying knowing how hard the characters fought to get there.

If you are a fan of detailed military history—or simply want to envelope yourself in a heartfelt chronicle about the resilience of humanity—this book is for you. Kenneth D. Evans sought to remember his father’s legacy and, in doing so, honors everyone who has ever fought and risked their lives for their country.