The final attack on the goblin homeworld is at hand.

The most powerful ships in the galaxy gather to attack.

But no one expected the goblins to be prepared.

Everything is ready. Elves, dwarves, and humans lay the foundations for their attack. The great dragon Rania has delivered a fleet of starfighters to aid in their battle. Nothing can stop them.

But the goblins reveal a strength greater than anyone suspected. Now, what should have been a carefully planned invasion, becomes a desperate strike to end the war before it’s too late. And once again, the keys to victory may rest in the hands of Radek and his friends.

However, Radek has lost more than most because of the Goblin War, and it has taken its toll. Everyone, including Radek himself, is worried he doesn’t have what it will take.

The cost for victory will be high. Is there anything he won’t have to sacrifice to end this war once and for all?

Find out what happens when Radek and his allies finally assault the Goblin Star. 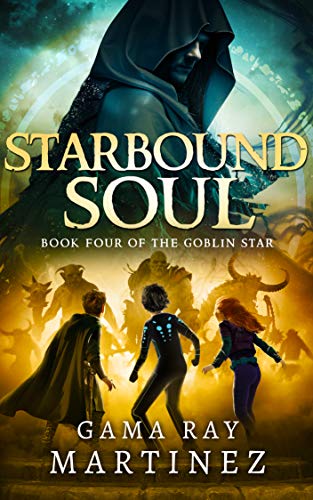 Starbound Soul, by Gama Ray Martinez, is the fourth and final book in the Goblin Star Series. This book is brand new! It came out just this month. This series features Radek, a pre-teen, and his two unlikely friends as they travel across different realms in order to save their home.

In Starbound Soul, everything comes to a breaking point when the goblins attack their space station. What should have been an easy final battle turns into a courageous struggle to overcome a powerful enemy. Radek and his friends are pushed to their limits and must find strength in the most unlikely of places. Do they have what it takes to defeat the goblins and save their home?
With three kids, ancient magic, and a galaxy that needs protecting, Starbound Soul is a fascinating blend of fantasy and science-fiction. Science and magic go hand in hand in this series, so it is perfect for fans of Lord of the Rings, Harry Potter, and Star Wars. You’ll find whimsy, intrigue, and enchantment in this futuristic space fantasy adventure.

It is clean, school-age fiction, but let’s face it—parents will love it too! With school coming to an end, the Goblin Star Series is a perfect series for your kids to start reading, or to read together as a family, for a fun summer adventure. My children loved the series. And we all felt that Starbound Soul finished it off with closure for the characters we loved most. This fast-paced epic adventure will have you and your children turning page after page.