The Die of Destiny: The Champion’s Quest Series

The Die of Destiny: The Champion’s Quest Series

Lucas Silver’s life is about to change. He thinks it’s because he’s made plans to escape from his foster home and make his way to New York, but then he and his friend Miles and two girls they’re acquainted with―Jasmine and Vanessa―find Hob and Bogie’s Curiosity Shoppe and agree to play a game of Champion’s Quest.

When the four kids walk out the front door of the Curiosity Shoppe, they immediately discover they’re no longer in West Virginia, but transported into the game and a wild fantasy world of dangerous goblins, brutish ogres, and a powerful witch.

They must work together as a team, overcome their real-world weaknesses, and believe in themselves and each other if they are to outwit, outplay, and survive their foes in this ultimate quest to defeat a treacherous monster. 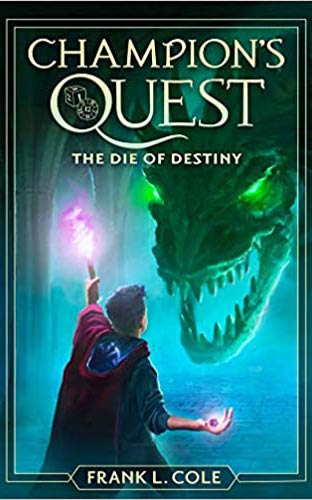 Champion’s Quest: Die of Destiny, the first book in the new Champion’s Quest series, is a fun story of adventure and friendship. It all starts with a game of Champion’s Quest that transports four friends into the board game itself. For these four kids, falling into the game Champion’s Quest, which is loosely inspired by the board game Dungeon’s and Dragons, means entering into a fantasy world full of vicious monsters, goblins, witches, and ogres. The kids must use teamwork and problem-solving skills to beat the game and, more importantly, survive.

The main character, Lucas Silver, is a young boy other kids can relate to. The book touches on Lucas’s struggles in foster care, which many kids can either identify with or gain understanding about the emotions involved in this difficult upbringing. Though set in fantasy, each of the four kids face real-life challenges. To get through the game, each character must identify his or her real-world weaknesses and learn how to overcome them. The overall message for readers is to believe in yourself. Even surrounded by action and adventure, Frank L. Cole does a great job of grounding these characters in reality so that readers can truly feel they know these characters. Though Cole touches on different themes of self-discovery, the book itself has a light-hearted and funny tone throughout.

The roleplay and fantasy elements of this book remind me of a combination between Jumanji and Brandon Mole’s series, The Beyonders. As the mother of an 11-year-old boy who enjoyed this book, I can say this middle-grade book would be perfect for school-age kids from 4th grade and up.