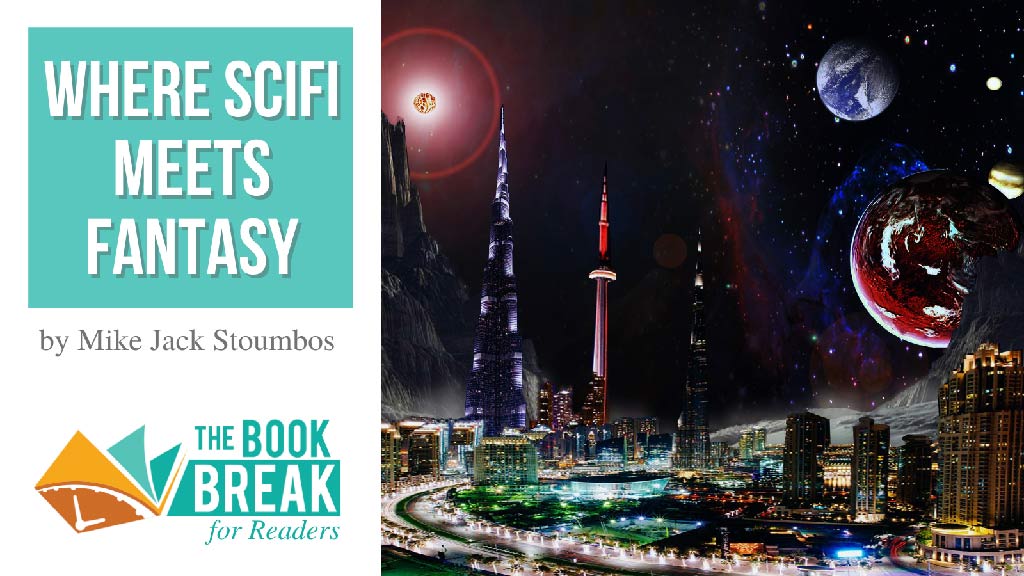 Have you ever wondered why “Science Fiction & Fantasy” is one combined section of the book store—especially when our mental images of the two genres might feel very different?

Typically, science fiction depicts a plausible, explainable future, with robots or spaceships. Even the most unlikely scenarios, like alien abductions or time travel, rely on some kind of “science,” whether real or made up for the story.

Fantasy, on the other hand, features fantastic creatures and magic which don’t require explanation. Often, mystical abilities and powerful objects are not questioned by characters (or readers), and settings inspired by the past allow for a sense of wonder and awe.

Seemingly opposites, these genres sometimes overlap, and wherever they intersect, they form lesser-known, harder-to-define, but truly exciting subgenres.

Some stories blend the genres by sending starfighters between planets, without focusing too much on how space-flight is achieved. Throw in some wizards and sword fights within a quest adventure, and the story may feel more like fantasy than science fiction. With films, novels, and TV series, Star Wars can be best described as space-fantasy—a kind of science-fantasy, which, as the name suggests, is like a fantasy story in a space-faring setting.

The best-known example of a space opera is Star Trek. Considering that many of the common adversaries are reality-altering gods, and questions of honor are determined by the Bat’Leth, there are enough unexplainable elements to call it “Space Opera” instead of science fiction.

Space opera stories don’t always have to verify scientific concepts, because the focus is usually on the emotional buy-in to the characters and their growth, more than strict realism. If you are looking for something lighter, brighter, and most likely with a happier ending than some of the gritty sci fi, space opera might be perfect for you.

Steampunk …and Other -Punks

“Alternate-history” meets “creative-engineering,” steampunk is a genre based on traditions from Jules Verne and Mary Shelley. The technology is called “retrofuturistic,” because it uses 19th-century building blocks but reimagines larger-than-life applications.

Steampunk features steam-powered machinery and is set in an alternate Victorian era. Other kinds of “punk” genres take similar liberties, but with a different source of power or style of technology. These include cyberpunk, biopunk, and solarpunk—all extrapolated to improbable and entertaining outcomes.

Some scifi/fantasy overlaps are hard to describe based on content, but stand out in their mood or writing style. Slipstream and weird fiction are subtler and harder to define forms of speculative fiction, which were inspired by cosmic horror concepts like H. P. Lovecraft’s, including mind control, loss of sanity, and macabre imagery. Usually, these stories feel eerie or unsettling, with at least one foot out of a fully believable reality.

On the lighter side, some authors use what readers know and love about the genres in order to poke fun at them. For example, the film Galaxy Quest is a space opera parody for fans of Star Trek.

Sometimes, writers use satire to call out errors and issues in society, such as Jonathan Swift in Gulliver’s Travels. Written in 1726, this classic follows an unbelievable, magical voyage, which could even be called science-fantasy for including one of the first “computers” in literature.

Whether you prefer plausible science, unexplainable magic, or anything in between, you can use these and other subgenres to search for stories that are perfect for you.

Mike Jack Stoumbos is a published fantasy and science fiction author disguised as a believably normal school teacher. He earned his Masters in Teaching from the University of Washington, and has taught English, Math, Theatre, and ELL at the middle and high school level. Mike Jack is a 1st-place winner of the Writers of the Future contest and the first novel of his new science fiction series, “This Fine Crew: The Signal out of Space” will be released in December 2021 through Chris Kennedy Publishing.