My Luck, book 1 from the Twisted Luck series

“My Luck,” from the “Twisted Luck” series

Coffee and my BFF are all the magic I need.

I see dead people. No, really. I find a disturbing amount of dead or dying people. It’s just my luck – if something freakish happens, I’m usually in the vicinity. Prime example: The body I found on the way to work this morning that’s now making me late. I can’t afford to lose my job at the coffee shop. College is expensive for non-magical folks like me.

Except things have gone wonky around me most of my life. I can’t possibly be a mage, though. I would know something like that. Right?

My best friend Jo is the only person I’ve let myself depend on the last several years. But when my name is found in the pocket of the latest dead body, I discover I have more friends than I thought. I’m going to need them all to graduate. I am determined to complete my certification program no matter what obstacles get in my way.

I have plans for my future: enjoy life, be a great EMT, and keep looking for the reason my twin died. If life is a series of steps, this is step one. With my luck, anything could happen.

My Luck – the first book in the Twisted Luck series, an Urban Fantasy you didn’t know you needed. A found family, non-romantic urban fantasy with a smattering of magical beasties. 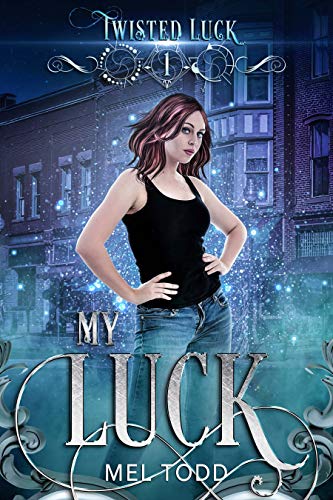 Book one of the “Twisted Luck” series, My Luck follows a young woman in Atlanta, Georgia named Cori Monroe, who is working on her goal of becoming an EMT—and keeps running into disastrously bad luck, so much that she is nicknamed “Cori Catastrophe.” In a world where about half the population is magic, weird things are bound to happen, but an improbably high number of them seem to happen around Cori, who has no magic of her own.

One of the biggest draws for me was the main character. In many ways, Cori could seem like your average, relatable young woman, just trying to get through college and find a job, but most people don’t randomly happen upon dead bodies or fritz out electronics when they get frustrated. This “slice of life” narrative included many of the things that I would hope to find in urban fantasy, including magical creatures and people with crazy powers, along with things that I hardly expected but really enjoyed. For example, the author often takes historical locations and events and provides really interesting magical explanations for what happened and why—and it totally makes sense that World War II was actually started by an evil mage!

One thing that I really enjoyed about My Luck, and which sets it apart from other new-adult urban fantasy, is that the main character’s plot is not based on (or diverted by) a romance. In fact, the “Twisted Luck” series does not feature any romance for the main character or her best friend, and that the author instead develops deep, engaging platonic friendships. For this reason, I felt that I, as a reader, had more of a chance to get to know, care about, and root for the main characters.

I enjoyed the first book so much that I dove straight into the rest of the series, and finished the first four in a week. I can’t wait for the fifth book to come out, and for Cori Catastrophe’s adventures to continue.