Would you love your enemy to save your world?

Syteria was kidnapped as a child. The Rhoans enslaved her, brainwashed and masculinized her in order to turn her into a soldier against her will. Despite this, she has not forgotten who or what she is. It’s why she can’t pull the trigger and kill her brother. She turns rogue in order to save him and his family, knowing that it will cost her everything.

But when the ship taking her to her execution is pulled through space and time, she finds herself a stranger in a strange land, reborn into a new body, the one she would have grown into had the Rhoans not changed her.

Darien, the half-breed prince of a noble House, serves out the last days of his term of exile for defying his emperor. When an alien ship appears out of a wormhole, he can’t resist going after it, no matter the price. He rescues the derelict spaceship’s only survivor, a barely warm corpse he doesn’t even realize is a woman.

His motives are suspect, especially when turning Syteria over to the tender mercies of the Imperium would cost him nothing and redeem him in the eyes of the emperor. Cultures and passions clash in this epic adventure featuring galactic empires, feuding noble houses, and court intrigues.

Ravages of Honor: Conquest is an Outlander in space with genetic engineering, nanotech, and swords. First in a series, with a complete story that can be read as a standalone. 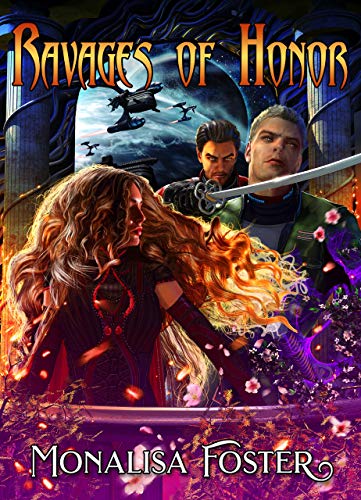 If you liked the grand scope of the novel Dune and would like to see a similar story with a female protagonist,—in particular, a space opera epic with highly-regimented, competing governments and wars that are as much internal as external—then check out Ravages of Honor: Conquest by Monalisa Foster.

This novel follows Syteria, who was kidnapped then brainwashed by the Matriarchy to be their soldier. However, when she is sent on a mission to her familiar home planet, she comes face-to-face with a foe she recognizes: her own brother. Though it would be treason against the Matriarchy not to kill him, Syteria breaks through her conditioning and spares her brother’s life. From there, Syteria finds herself hunted and grappling with her indoctrination as a soldier versus her own moral compass. After going rogue, Syteria is forced to look at the world and war in a different way, and in her travels (and trials) her new perspective allows her to form a connection with someone who would have otherwise been her enemy.

Ravages of Honor: Conquest features a strong female lead, who has been essentially programmed to kill, but remains relatable because of her internal conflicts and growth through the narrative. Although she is a soldier, she does not wish to kill needlessly; although she is strong, Syteria needs to go through the struggles of the book to realize her true power. I appreciated watching how her personal morals drive her to work against the conflict, with a new goal she shares with her newfound ally: stopping a pointless war.