Matt Wright’s debut novel and epic space opera about a desert planet struggling for its right to survive!

Their world is dying…

…Wardens hold all the power.

The Ruin Star looms over them.

When a boy named Gun meets an oathbreaker and a drunken scholar, he knows his life will never be the same. Driven from his desert town, he finds his place in the city.

But a revolution is brewing. The people are restless, and war looms closer every day.

What is Gun’s place in society?

Can he learn to fit in?

Aithen finds himself in a similar situation. When he saves a Warden’s life, everything gets better. But is he ready to join the military?

Will he ever belong?

What choice does he have?

One will enjoy privilege and station. The other will get everything taken from him.

Both will change the world.

You’ll love this space opera fantasy because of the authentic relationships, strong female characters, and the epic struggle that launches a series among the stars. Buy it now! 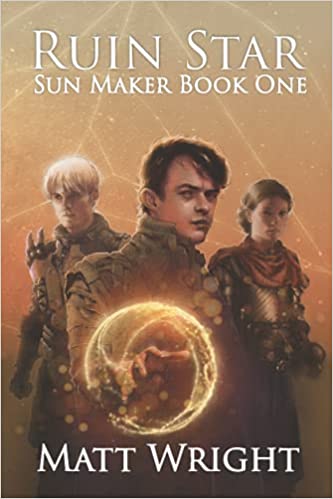 Fantasy and sci-fi readers, prepare to completely jump into an epic new world full of action, adventure, revolution, and resistance. The entire Sun Maker Saga falls into the space opera genre, and for those who are unfamiliar with that term, think of a soap opera in space—in the best way possible.

The first book in the series, Ruin Star, hooks you from the beginning with its strong characters and the introduction into this new world author Matt Wright has created. In this dystopian, dying world, Wardens, who are pretty much controlling government officials, hold all the power. Revolution is brewing, and in the midst of this, we meet the main characters.

Gun is a boy who is driven from his desert town into the city, where he struggles to find his place in society. Aithen, another character, finds himself in a similar situation in the city after he saves a Warden’s life and is able to escape the town he hates, but at the cost of joining the military. One of the strong female characters learns a form of magic known as myrna in order to avenge her friend’s death. Each character must risk it all to stop the revolution and make the world a better place, or at the very least, make a difference in a corrupt world. I appreciated how each of these characters felt like misfits, but they did not let that stop them from taking spectacular journeys to change the world as they knew it.

Ruin Star is the first of six books in the Sun Maker Saga. The second book, Fury Fall, is available now and the remaining four will all be available before the end of April 2022. If you like reading long series from start to finish, you will love this smart quick release strategy from author Matt Wright. Once you pick up the first book, you won’t want to put it down.