Why We Fought: Inspiring Stories of Resisting Hitler and Defending Freedom

Why We Fought: Inspiring Stories of Resisting Hitler and Defending Freedom

Some were soldiers like the Ghost Army, an eclectic group of former artists, actors, and engineers who engaged in top-secret tactical deceptions by staging ingenious decoy armies. Using inflatable tanks, radio transmissions, and sound effects, they were able to trick the Germans throughout the course of the war, often working close to the front lines of the fiercest fighting.

Some were ordinary citizens like William Sebold, a German immigrant and US citizen, who could have been a deadly foe, but instead chose the Allied cause. When he was coerced by the Gestapo into becoming a spy in America, he instead approached the FBI and offered to become a double agent. His efforts successfully helped bring down a dangerous German spy network that was dedicated to stealing industrial and wartime secrets and sabotaging America on home soil.

These dramatic and inspiring personal stories shed light on some of the darkest days of World War II and one of the most perilous times in human history. As the Nazis swept through Europe, citizens around the world faced an individual and national complex moral question: How do you respond to the tyranny and bloodthirsty madness of the Nazis? These are stories of ordinary men and women who would not surrender or compromise. They resisted and fought with total commitment for freedom and democracy despite the personal cost. 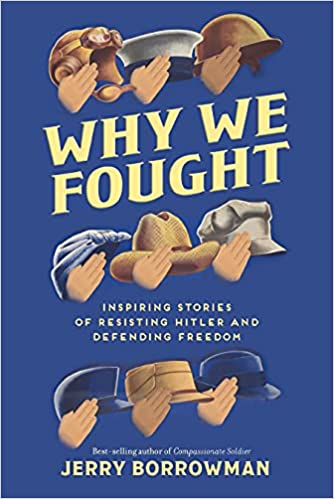 This work of historical nonfiction is unlike any World War II book I’ve ever read. Author Jerry Borrowman’s skill and experience as a historical nonfiction and fiction writer truly shines through with his dynamic and vivid story-telling. Featuring seven unique, true stories, this book takes an entirely different approach to sharing the history from one of the most brutal times in world history.

What sets this book apart from other World War II books and what ties all of the seven stories together is that every short story is about a brave volunteer who put themself at risk to fight against the Nazis and to save lives. The stories go beyond the battlefields to really delve into the behind-the-scenes actions that took place and show what it truly means to resist tyranny for the greater good.

One story follows a woman who worked as a double-agent. The Germans sent her to spy on the Americans, but instead, she bravely agreed to spy on the Germans for the Americans, providing valuable information that helped change the course of the war. Another story is about a woman who lost her leg but did not let that stop her. During the war, she ended up in France and she, an American woman, helped to lead the French resistance against the Nazis.

This book contains incredible stories about some courageous individuals who volunteered and sacrificed their safety to make a difference during World War II and in thousands of people’s lives. The best part about this book being broken into seven stories is that you have the option to read it cover to cover, which you might very well do as it is so compelling you want to keep turning the page, but you can also slow down and read it one story at a time. Educational, inspiring, and entertaining, anyone who reads historical novels is sure to love Why We Fought: Inspiring Stories of Resisting Hitler and Defending Freedom by Jerry Borrowman. I would highly recommend this to history buffs or anyone who is looking for an inspiring story of bravery.