“My Fair Assassin” Book 1 of the Paranormal Misfits Series

It’s not every day your fated mate targets you for assassination.

A lonely foster teen meets a fae warrior on assignment.

Crysta is freakishly different, never quite fitting in with her various foster families. Her shocking looks and creepy powers scare off potential friends, and her otherworldly presence tends to attract unwelcome and dangerous admirers. Now that she is finally on her own, her plan is to focus on dance, trust absolutely no one, and avoid the rest of humanity. Her plans are shattered when a handsome man breaks into her apartment and declares he’s there to kill her.

As a highly skilled assassin and future heir to the Seelie throne, Prince Jareth carries the weight of the Fae Realm on his shoulders. When he’s given the assignment to take out one of the biggest threats the Seelie Court has ever known, he’s not expecting said threat to come in the form of a petite teenager who can barely afford to feed her cat let alone mastermind the destruction of an entire world.

He’s duty-bound to see this assignment through, until he realizes he’s been sent to kill his fated mate. He must follow through with his assignment or risk the wrath of his father, but killing Crysta means losing the most precious gift a fae warrior could ever hope to receive. The love of a fated mate. 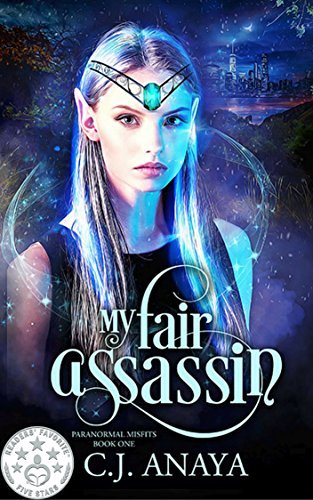 It would be mind-blowing enough for any teenage orphan in San Diego to discover their connection to a hidden magical world—let alone find out that their soulmate is also their would-be assassin.

My Fair Assassin, by CJ Anaya, is the story of Crysta, a young woman who’s never quite fit into the normal (or mortal) world. As an orphan, she didn’t mesh with foster families, and her strange looks and bizarre abilities made friends hard to find as well. Once on her own, Crysta is determined to forge her path as a dancer, until a fae warrior arrives to kill her… which is probably the most dangerous meet-cute I’ve ever read in a romantic fantasy novel and a great introduction to the charming and intensely proud high fae.

Crysta’s entire existence is turned upside down as she discovers her connection with the fae courts and that even if you have a “fated mate,” romance is not necessarily easy. This book is the perfect combination of a heart-warming romance with heart-pounding suspense. I particularly enjoyed the cast of characters, the humor, the adventure, and the tasteful swoon-worthy romance that is appropriate for teens and up. And, if you like to read series, you’re in luck: My Fair Assassin is the first of 6 books available in the Paranormal Misfits series by CJ Anaya.