Khyven the Unkillable, Book 1 of the “Legacy of Shadows” series

A rising champion. A secret rebellion. A deadly crossroads.

After forty-nine victories in the bloody Night Ring, Khyven the Unkillable is a celebrity gladiator. If he can survive one more battle, King Vamreth will free him and declare him a knight.

But the king doesn’t play fair.

Instead, for Khyven’s fiftieth “battle,” the king orders him to travel through the magical noktum and infiltrate the secret lair of a rebel leader known only as “The Queen in Exile.” All Khyven must do to earn his knighthood is gain the queen’s trust…

As Khyven struggles to complete his mission, he is caught between a growing respect for a rebel queen who will do anything for her people and a ruthless king who will stop at nothing to crush her. 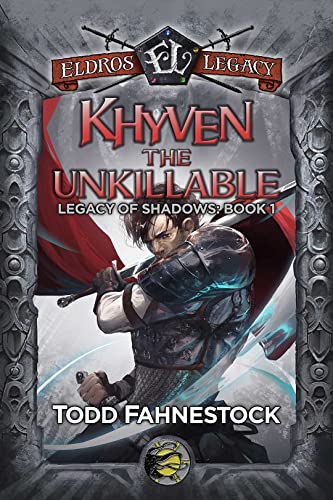 As a gladiator, Khyven has never lost. After triumphing in forty-nine consecutive bouts in a deadly arena, Khyven has already won his freedom from slavery, while showing not only skill but creativity and unexpected mercy. With one more successful fight, he will be named a knight . . . but the king has special plans for his legendary warrior’s final task which will send him far beyond the arena. In order to achieve everything he has ever wanted, Khyven is ordered to infiltrate the hidden camp of a traitor to the throne, who calls herself “the Queen in Exile” and will put Khyven’s “unkillable” reputation to the ultimate test.

Khyven the Unkillable is a superb fantasy adventure, written in the tradition of authors like R. A. Salvatore for audiences who would gladly follow a fascinating but flawed hero through hell and back—and in the “Legacy of Shadows” series, that’s not just an expression. The author, Todd Fahnestock, clearly loved creating this book, from the world, to the characters, to the perfectly-paced fight scenes. I appreciated not only how vivid the action was, but probably more importantly how the emotional stakes built the suspense. Throughout his adventures, the main character constantly grapples with questions of loyalty, personal history, or even the possibility of love while facing the kinds of odds that inspire legends.

This novel was gripping from the first page through the finale, and, fortunately, it is the first installment in a larger, interconnected fantasy saga. Khyven the Unkillable, book 1 of the “Legacy of Shadows” series, is also the first part of a sprawling multi-author universe called “The Eldros Legacy,” and they are releasing a new sword and sorcery fantasy tale every month. With a great start and so much to explore in this new fantasy world, I can’t wait to see where they go next.