The Legend of the Dream Giants

The Legend of the Dream Giants

An orphaned giant named Berg is hoping to find just one person he can call friend.
For many years, Berg has lived alone; the only reminders of his family are his mother’s satchel and his recurring dreams of a white bear who shares a magical sand from a fallen star.

Sometimes, when Berg feels lonely, he will risk entering a village to trade a smooth river rock or a feather for food. He’s really searching for kindness and companionship; but with every attempt he makes, people chase him away, thinking he is Ünhold―a giant and a monster.

In his travels, Berg comes upon a city made of iron, where he meets a little girl, Anya. To his amazement and delight, Anya knows about the magical dream-sand, too, and says she wants to be his friend.

The mayor also befriends Berg and enlists him to guard the city from the dangerous Ünhold. But Anya suspects the mayor has other plans for the young giant. Fearing the city isn’t safe, she warns Berg to flee. Confused and torn between his two friends, the young giant has to figure out where he can place his trust.

This tender and unique story-within-a-story is a riveting tale of loss, longing, adventure, being yourself, and finding the true meaning of friendship. 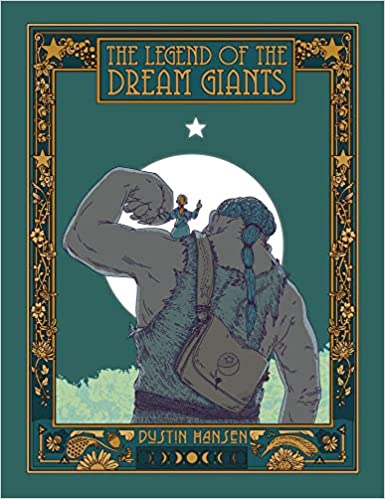 Berg is an orphaned giant who is looking for someone to call “friend.” It is lonely for him as he travels the world looking for that sense of belonging. Everyone finds him scary, until he meets a little girl who becomes his friend. On his adventures, Berg must learn about trust and discover the true meaning of friendship.

The Legend of the Dream Giants is an awesome and fun book for school-aged children (although parents will love it too), with some amazing illustrations that were done by the author himself.

Though this is a fun adventure story kids will love, it also teaches important lessons. One of the most important being how to accept yourself for who you are. It’s okay if you’re not a part of the crowd you think you should be. You don’t have to be friends with the “cool” people, just with the people who make you feel comfortable, like yourself, and at home wherever you are. What’s important is finding your people and always being kind to others who are different from you or who you might not understand.

Parents, you are going to want this for your young readers. I recommend this book to children who can read full-length novels, so perhaps eight and up, although this book is also available in audio, so this is certainly a wonderful book for parents to read aloud or play aloud to their children.