God of Neverland: A Defenders of Lore Novel

God of Neverland: A Defenders of Lore Novel (Defender of Lore Book 1)

In this magical reimagination of Peter Pan, Michael Darling, the youngest of the original siblings who flew to Neverland, has grown up and left his old life behind.

But when Peter Pan disappears, not only Neverland, but the imagination of every child, is in danger of being lost. Now, Michael must return to the fantasy land of his boyhood to save both worlds. Determined to stop evil, fight for Neverland, and find Peter Pan, will Michael be able to save the magical and physical world? Or will his biggest fear come true? 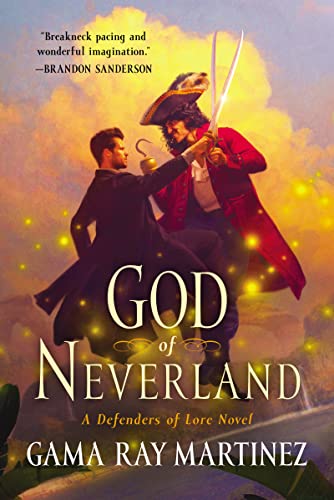 Gama Ray Martinez’s God of Neverland is the return to fantasy that we all long for, but it’s not at all whimsy. This story takes us through adventure and battle, imagination and hope, and makes us wonder, what place does magic have in our lives after we’re grown? The story follows Michael Darling, who we learn did not go back to the mundane after his adventures in Neverland. Instead, he began a search for the world’s hidden wonders.

Michael’s wit and rapport with fellow Knight of the Round, Vanessa, make him an endearing character to follow. Struggles that we all experience as we leave childhood—responsibility to ourselves, our communities, and our families—war within him, and Michael strives to understand where he belongs. As someone not of Neverland but too altered by its magic to return to mundane life, what is his purpose?

Longtime fans of Martinez will love the puzzles and mysteries that fill God of Neverland’s pages, though they come with a Neverland twist. Martinez manages to combine logic with the absurd to create riddles that only someone with the heart of a child could discern. In his own way, he has fleshed out a world that we all know and reintroduced it to us as something new, wonderful, and more dangerous than we dare to remember.

God of Neverland is an adventure. It’s a reminder that while you can’t stop yourself from growing up, you never have to grow out of imagination. Gama Ray Martinez masterfully demonstrates that magic is for everyone, so long as they are brave enough to wield it.

Maponos, the Celtic god of youth, has gone missing, and if he isn’t found, his absence threatens to destroy the dreams and imagination of every living creature… and soon reality itself. Most readers—who are not part of a secret supernatural order—know Maponos by another name: Peter Pan.

In this long-awaited continuation of the classic Peter Pan stories, Michael Darling, the youngest of the siblings who first flew to Neverland, has grown up. Like most grown ups, Michael has faced some harsh realities and experienced enough loss that even he severed ties with the magical world. However, when Maponos disappears, a secret order called the Knights of the Round requires Michael’s service one last time. To restore his old friend, Michael must draw upon every youthful memory and return to the fantasy land of his boyhood, where he will face new challenges and hopefully find Peter Pan in time to save both worlds.

God of Neverland by Gama Ray Martinez comes to us 120 years after J. M. Barrie’s novel, Peter and Wendy, with more lore, mythology, and swashbuckling, just in time to bring a whole new generation of young audiences to Neverland. God of Neverland is not just for kids and teens, but for their parents and nostalgic adults. Readers who grew up on the original tale and other portal fantasy realms like Narnia or Wonderland will love the opportunity to venture once more into the realms of childhood dreams. If you are looking for more hope and wonder in your fantasy or want to read the novel that Brandon Sanderson applauded for its “wonderful imagination,” God of Neverland is a must-have addition for your library.