Can we have different opinions and still be friends?

If you’ve ever:
● had had a disagreement with someone over politics, religion, or social issues turn into a heated argument
● wanted to share your opinions without judgment . . .

. . . You need to apply THE RUBY RULE—a new approach to elevating your communications with humility, humanity, and hope.
In this transformative book, best-selling author Arthur F. Coombs III shares the secrets of shifting your mindset from one focused on self to one focused on others. In seeing others through a Ruby lens, not only will you be able to effectively express your views and hold discussions without being controlled by your emotions, you will gain a deep appreciation for those who may challenge those views.

Being loud doesn’t mean being heard.

If someone says or does something unkind or insulting, how do you respond? When you come to understand that each person is worthy of your respect and love, it’s a game-changer—for you and for them.

With the Ruby Rule, you can heal from hard things.

Listen more, label less, and you will heal more and hate less. So revolutionize the way you interact with others by going ruby today. 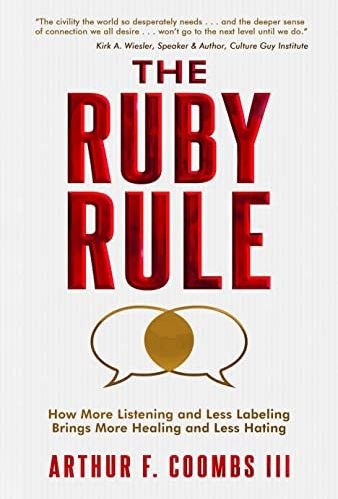 In his new book, Arthur F. Coombs III introduces The Ruby Rule, which goes even deeper. While it’s great to follow the golden rule, this book treats that as a minimum. According to Coombs, the greater goal should be to exceed others’ expectations of treatment. In many cases, people don’t expect courteous and respectful treatment from themselves or others to the point that many struggle with the feeling that they don’t deserve such positive treatment or might be reluctant to extend those graces to others. This is why you should seek to treat people better than how you or they expect to be treated.

I found The Ruby Rule to be so helpful and important for responding to many of the arguments and manners of today, whether online or in-person, among strangers or even close friends. Amidst current conflict, when it feels like many are failing to show fundamental respect for others, it is more valuable than ever to reach out with more human kindness. This is not to say that Coombs wants people to shut down and not speak their own opinions; moreover, he is providing advice and examples of how to present even conflicting views while fulfilling the ruby rule.

One thing I really like about this nonfiction author is that he’s such a good storyteller. Along with evidence and expertise, Coombs makes his advice accessible through real-world situations. He also provides thoughtful questions and tips throughout. Because he features a wide representation of religious and political backgrounds in his examples, anyone can approach this book to learn. I highly recommend it for adults (and even teens) who are interested in communicating better and improving their (and others’) daily interactions.